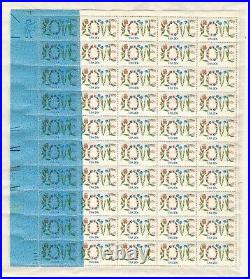 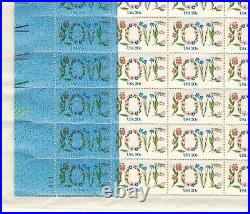 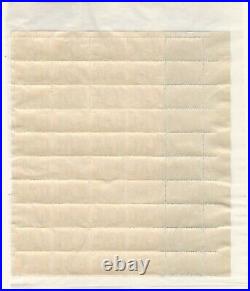 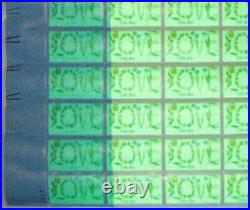 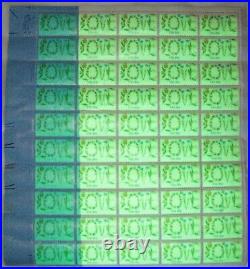 1982 “LOVE” Sheet Sc. Dramatic Blue Ink Printing Flaw Complete Pane of 50 Stamps. 1982 20¢ “LOVE” sheet printed with dramatic blue inking error. The only known existing 1982 “LOVE” stamps with this major error. The purchaser was well known to the clerk of its philatelic section as an avid stamp collector. At the time, the philatelic section was in a separate room away from the regular window section. When the “LOVE” stamp came in, she showed him the error sheet. He asked her how many she had and she replied that this sheet was the only one they had received. Reasonable offers will be considered. Dramatic printing errors like this one appear on only a few other stamps of the era. For example, the 1986 22¢ “Navajo Art” stamps Sc. The ink that ran on the Navajo Art stamps is black and not blue as with this “LOVE” sheet. The price of Navajo Art error sheets is less than this sheet of 20¢ LOVE stamps because a quantity of the 22¢ Navajo Art sheets were found shortly after its issue in 1986. This 1982 20¢ LOVE stamp error sheet is the only one known. No other 20¢ LOVE error stamps with either of the two different blue inking error as in this sheet have been found to exist in the 30 years since the 20¢ LOVE stamp was issued. The blue printing error on this 1982 “LOVE” stamp sheet covers its complete left margin and the entire first column of 10 stamps, then partially covers the left side of all 10 stamps in the second column, with the remaining columns of stamps appearing as normal. The sheet has ten horizontal strips of three adjoining stamps, with each triptych strip containing all three of these different variations of the “LOVE” stamp. Those ten strips are the only known 1982 “LOVE” stamps with this error combination. When this sheet (pane) initially printed in a full uncut sheet of 4 panes of 50 stamps each, only the upper left and lower left panes had the possibility of having such an error as the two right panes of 50 start in the middle of the uncut sheet and end on the opposite edge of the paper from where the inking flaw occurred. This major printing error may have been the cause of the missing color varieties known of these “LOVE” stamps. It is not unreasonable to assume that when the spreading inking problem was discovered by the printers, they shut down the printing presses to fix the cause of the blue ink run. Then when they restarted printing, not all of the colors in the press units had been fully adjusted or turned back on. We include scans taken under short-wave length ultraviolet (UV) light. These show the “tagging” on this sheet was applied on top of i. After the blue error was printed. We note that most of the lower left portion of the sheet is stuck to a glassine sheet protector, while a little of the upper left portion of the sheet is not stuck (at least two complete strips of 3 seem free). That was the condition we acquired it in 1982. We chose not to attempt to separate the gummed strips from those stuck in order to keep the sheet intact. We also chose not to soak the stamps off the glassine page to make mint no gum error strips. Back then, we decided to let the next owner of the sheet make those decisions. This item is in the category “Stamps\United States\Errors, Freaks, Oddities”. The seller is “abctoo” and is located in this country: US. This item can be shipped worldwide.